The Prince & Princess Back

Featured on the NBC TODAY SHOW 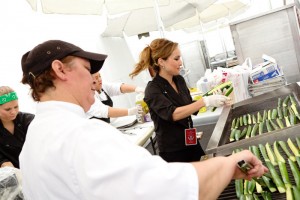 See the video clip from the Today Show! http://on.today.com/OLS0hr

We were honored to work with Giada De Laurentiis to prepare and serve a luncheon for the Duke and Duchess of Cambridge (William and Kate) and 3,500 invited guests for a charity polo match at the Santa Barbara Polo & Racket Club.

Giada’s custom menu was well received by all who attended, and included delicacies such as smoked mozzarella with fig and beef tenderloin crostini, followed by a unique sweet corn lasagna with blistered tomatoes and roasted asparagus.  The mouth-watering dessert was a choice of strawberry-meringue trifle, tarragon-merlot and toffee truffles, cranberry and chocolate chunk cookies, and lemon-ricotta cookies.